Recently I started to model user search queries using Tensorflow. After some discussion with my team, the original problem boils down to a set of classification tasks, where each task is a multi-label classification problem. One interesting observation here is that the tasks are highly related: knowing the labels of one task could help one to guess the labels of another task. So perhaps it would be a good idea to train all those tasks in the same neural network simultaneously, hoping that the commonality across the tasks will be exploited during the learning and improve the final performance.

As the number of tasks increases, my training data becomes larger and larger. As a consequence, directly feeding such training data into Tensorflow’s session becomes laggy and results in poor GPU utilization. Moreover, it is vulnerable to memory leaks and can’t be used for days-long training. In this article, I will explain data feeding problems and design a much more efficient and robust input pipeline for days-long training. If you have ever struggled with Tensorflow’s multithread-based queue and frustrated by its low performance, then you should definitely give this multiprocess-based implementation a try.

This post was originally published when Tensorflow was at 1.1, in which data pipeline was still inmature. If you are using Tensorflow >=1.4, you may leverage the new Dataset API. It implements a similar idea as described in this post.

A Short Brief on Multi-Task RNN

For employing multi-task learning on sequence data, I use recurrent neural networks as the backbone of the network. The structure of my multi-task RNN looks like as follows: 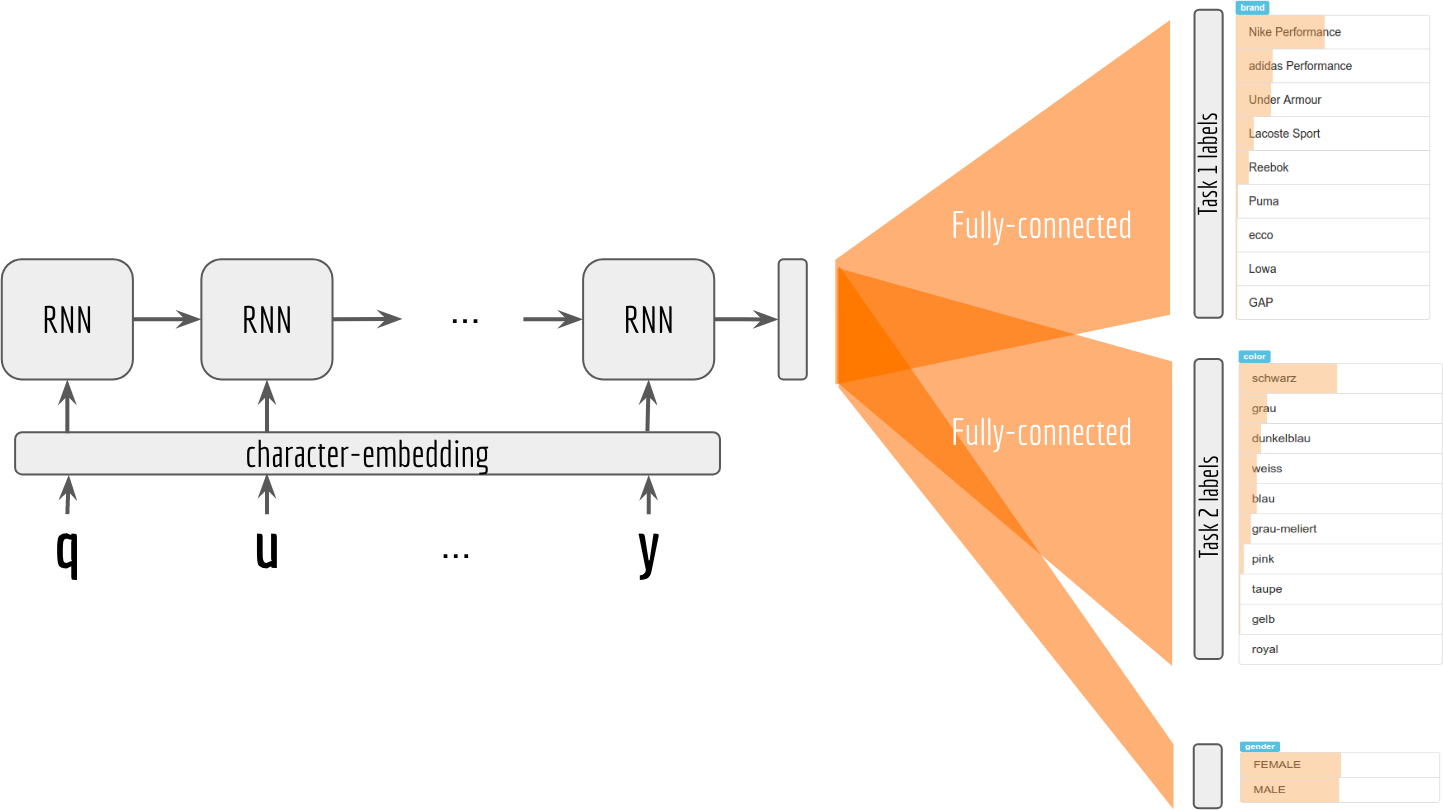 For the sake of clarity, I only draw a very basic version of my network here. One can certainly try different variants such as replacing RNN cell with LSTM and GRU cell, adding bidirectional or stacked RNN layer on top of the chain. What’s important here is that the final output of RNN chain should be shared by all task-specific fully connected layers, which are then followed by softmax layers to obtain the final label distribution on each task. This can be done via:

Given the logit output and groundtruth labels on each task, we can compute the task-specific cross-entropy loss and total cross entropy loss as follows:

At this point, there are at least two straightforward ways to solve this optimization problem.

Our data comes (almost) directly from the production system. Training data of each task is a JSON file and looks like this:

As I mentioned before, the good news is that data is aligned. Queries from different JSONs are sorted in the same order, which is perfect for the joint training method. However, we can not feed such JSON files directly to Tensorflow, preprocessing is required. Specifically, one needs to do the following steps before feeding the data to a Tensorflow session:

Some preprocessing steps (e.g. bucketing) can be done in advance, whereas others need to be done batch-wise especially when data is large. For example, building and normalizing labeling matrix of each batch.

A straightforward way is running batch generation and training procedure sequentially in the same process, such as:

If we visualize the above code, the workflow looks like the following graph:

There are at least two problems of this workflow:

I have tested this implementation on a machine with a quad-core CPU and NVIDIA Tesla K80. The average GPU utilization is below 30% and only one CPU core is used. Increasing batch size only makes it worse.

Having these problems in mind, I resort to Python multiprocessing package to introduce some asynchronous and parallel computation into the workflow. I’m aware that Tensorflow has a thread-based queue API already. Unfortunately, after hacking with it for one day, TF thread-based feeding pipeline still performs poorly in my case. In fact, it is even slower than the above naive implementation. Despite the bad performance of Python threading (due to Global Interpreter Lock), I also found several reports regarding the low performance of Tensorflow queue on stackoverflow and github. As I’m writing this blog post, there is an open discussion on github about redesigning TensorFlow’s input pipelines. Given that Tensorflow’s queue API may change in the next versions, I decide to build asynchronous queue by myself. Thanks to the multiprocessing package, implementation is very easy and straightforward.

Here is an overview of my data feeding workflow. I will explain the ideas behind this graph later.

The main ideas are following:

Here is a very basic implementation of those ideas. Again, my code is in Python 3 with type annotation.

I tested the new data feeding pipeline on the same machine with a quad-core CPU and NVIDIA Tesla K80. Setting the batch size to 5000, I’m able to reach on average 90% GPU utilization and 95% CPU utilization on all four cores. Needless to say, I’m very happy with this result. Efficient and reliable data feeding allows me to focus more on the model itself and explore more with large-scale data, which may reveal interesting patterns that otherwise won’t be significant or even observable.

Using Tensorflow for Preprocessing in Subprocess

In some cases such as image-related task, data preprocessing means much more than a simple normalization. Therefore one may need to build a computation graph for preprocessing as well. Luckily, adding Tensorflow sessions to our new data feeding pipeline is very straightforward. One can simply modify run() method in SingleBatchGenerator class as follows:

In this example, I open a TF session in each subprocess and restrict the computation to CPU-only via with tf.device("/cpu:0"). This will leave all GPU resource to main training procedure. When you use nvidia-smi to check the GPU status, you will find something similar to this:

Judging from the GPU memory usage, one can observe that only the main process (with PID: 9961) is running on GPU. All subprocesses (PID:10021 - 10046) are mainly on CPU. However, the reason that nvidia-smi still captures and shows those CPU processes isn’t very clear to me. Perhaps because of the implementation in tensorflow-gpu package.

Is Memory Leak a Real Problem?

Yes, it is. Some memory leaks are crafty and hard to notice if the training procedure only takes an hour. I can recall many times that my program crashes during the days-long training because of the memory issue. There are many places that memory leaks can happen, e.g. dict.pop() in Python 3.6 and tf.sparse_tensor_to_dense. But when it comes to training DNN with Tensorflow, memory leaks are more likely to hide in the data preprocessing and batch preparation steps.

The new data feeding pipeline is less prone to memory leaks. Not because it won’t generate any memory leak during preprocessing, but because it gives one better control by restricting the memory leaks to a subprocess. When the memory usage reaches some threshold, one can simply terminate all subprocesses and respawn them. The training procedure is separated in the main process, thus won’t be affected or interrupted. The only thing you might lose is seconds of training time while waiting respawned new subprocess ready. Nonetheless, such loss is nothing compared to an unexpected system crash.

Finally, I’m not saying you should leave memory leak as it is. Instead, you should actively diagnose it and fix it. I often use memory_profiler for monitoring memory consumption and diagnosing the problem. Its visualization feature is particularly helpful.