Benchmark a Decentralized Search System on 79 Past Releases

Jina is designed as a decentralized system from day one. Components are modularized as microservices, which we call Pea/Pod in Jina idioms. The data passing is done via ZeroMQ and gRPC. Comparing to the traditional deep learning frameworks that follow a monolith architecture, latency and overhead are something the community and we care about a lot.

From the first release v0.1 in May 2020 to 0.7.7 today, we have released 79 versions, including 2800+ new commits with 35K lines changes from 50+ contributors. How is the indexing and querying speed now comparing to May? Most importantly, how can we even benchmark fairly over different releases?

This post will explain our containerized benchmark environment and highlight those changes made in the last few months that significantly improve/degrade the performance.

Jina is an easier way for enterprises and developers to build cross- & multi-modal neural search systems on the cloud. You can use Jina to bootstrap a text/image/video/audio search system in minutes. Give it a try:

If you are a Jina user, then you must know jina hello-world: an one-liner that showcases the entire index and query workflows on Fashion-MNIST dataset. It indexes 60,000 images via an index flow. The vectorized data is stored into multiple shards. It then randomly samples test set as queries, ask Jina to retrieve relevant results. Below is Jina’s retrievals, where the left-most column is query image.

This one-liner demo has been shipped in every Jina releases since v0.1, with a consistent high-level task across versions regardless the changes of the low-level API. This is perfect for serving as our benchmark task. The code snippet below shows the sketch of the benchmark function:

Although Jina today provides many handy interfaces such as Flow.index_ndarray() and TimeContext, allowing you to write the same code more concisely; they are not necessarily available in the early versions. To maximize the compatibility, I use a very primitive style of Jina programming. I even put from jina import ... inside the try-except block, in case we don’t have those interfaces (or in a different module structure) in the early version. Readers should not take it as the best practice.

So we want to run benchmark() by looping over all releases. Of course no one want to pip install one by one and mess up the local environment. We want to conduct each experiment in a clean and immutable environment, and make sure the whole set is reproducible.

I use the Docker image tagged with jinaai/jina:x.y.z published on every patch release. It is a self-contained image based on python:3.7.6-slim with all dependencies installed. My benchmark function (app.py) has to be running inside these containers to get an accurate result. Here is how the Dockerfile of a benchmark container looks like:

Note, ARG is put in front of FROM to make version number as a parameter, so that one can choose a specific version for benchmarking. I then wrap docker build and docker run with a simple Bash script, which lists all releases and loops over them:

The figure below illustrates this procedure, where the results are aggregated to benchmark.json: 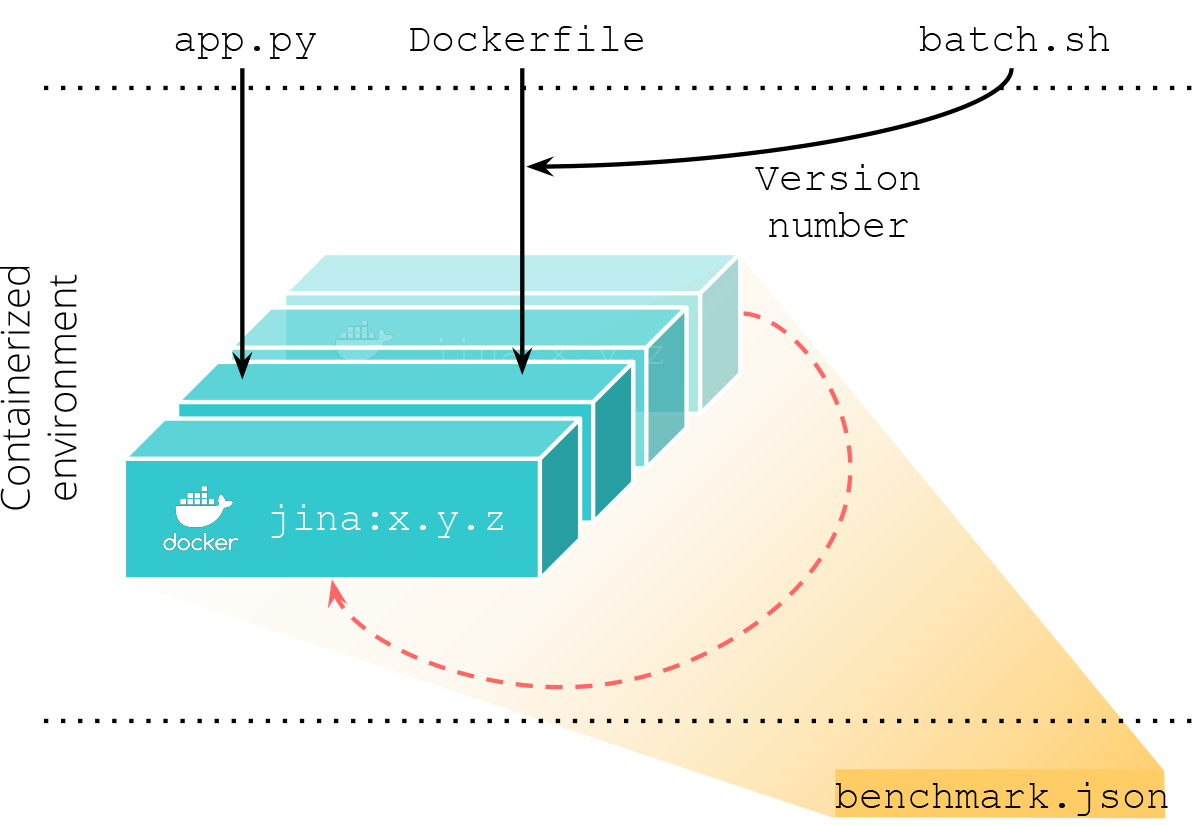 The source code behind the benchmark environment can be found here.

Quick Analysis on the Speed

I run the benchmark on a 6-Core i7 machine with 32GB memory, with parallelization and sharding set to 4. In the end, the earliest version I can benchmark is v0.0.8. That was on Apr. 23, 2020, one week before first release.

Like traveling with a time machine, it is fun to look back on what we had back in May. Interestingly, the architecture and high-level user experience are consistent enough to benchmark all history versions. Four things made this benchmark possible:

If you’d like to share some experiences and thoughts on latency issues, welcome to join our monthly Engineering All Hands via Zoom or Youtube live stream. If you like Jina and want to join us as a full-time AI / Backend / Frontend developer, please submit your CV to our job portal. Let’s build the next neural search ecosystem together!