From Then to Now: a Curated List for Neural Search and Jina

Since 2017 I have been working on the neural search in different teams: Zalando Research (2014-2017), Tencent AI Lab (2018-2020), and now at Jina AI we are building the neural search ecosystem in opensource. Over the years, I explored quite a few ideas about neural search: from its core algorithms to the high-level system design, from a very academic-oriented prototype to a production-ready system. Readers can find those traces in my previous posts. These exploration and lessons-learned are incredibly valuable as they make what Jina is today.

In this post, I collect the most featured soundbites from my earlier posts and group them into different categories. If you are new to neural search, or want to understand the design principle behind Jina, this curated list would be a perfect starting point.

Jina is an easier way for enterprises and developers to build cross- & multi-modal neural search systems on the cloud. You can use it to bootstrap a text/image/video/audio search system in minutes. Check out Github and give it a try: 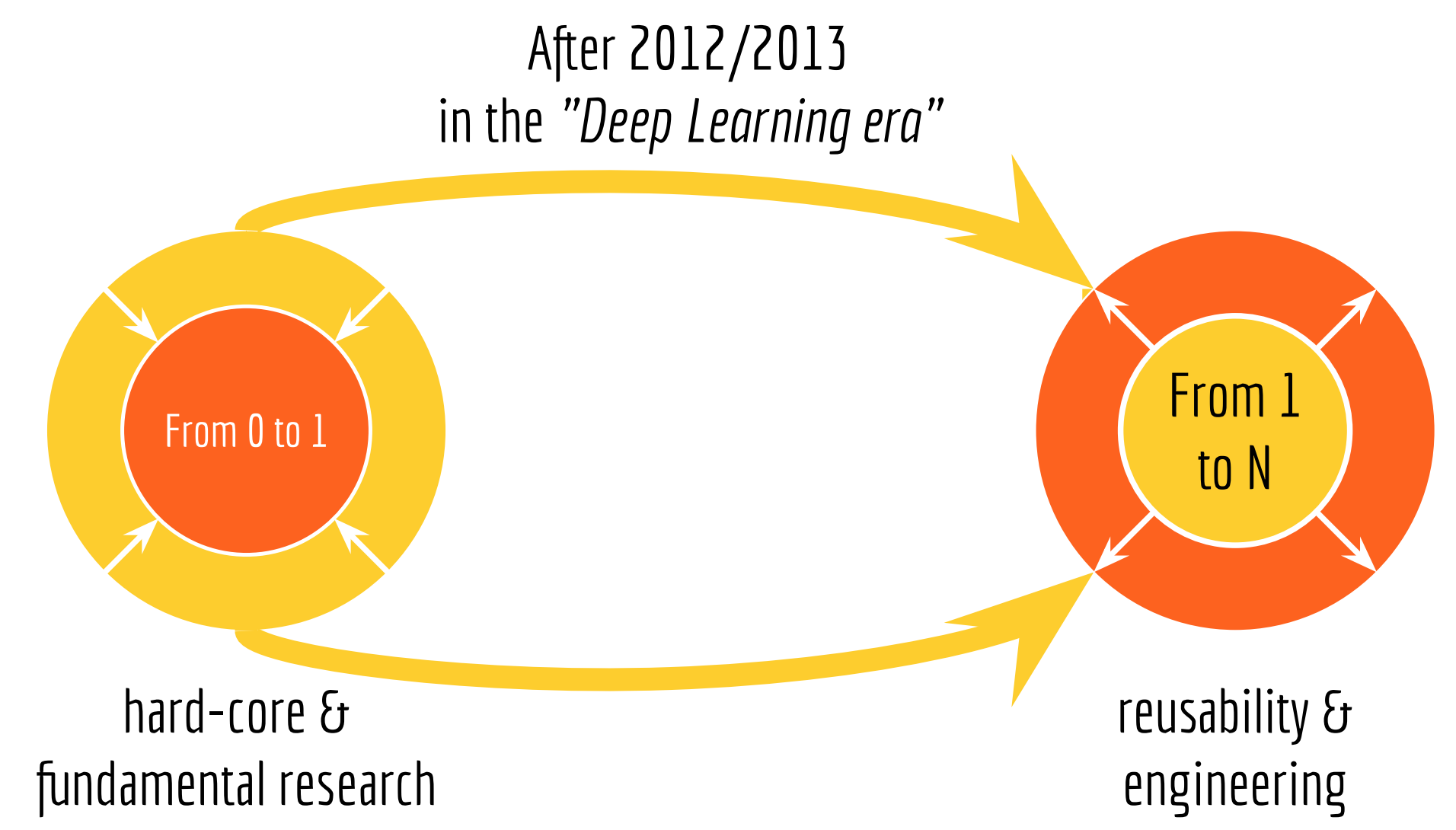 Forget about training! It is not (economically) feasible anymore.

… the emerging AI supply-chain: only a very small number of people in the world will work on training new models from scratch, they deliver a “pretrained model” to the rest of the AI community. Most of AI engineers will then try to make sense of this pretrained model by adapting it to their applications, fine-tuning based on their data, incorporating domain knowledge to it and scaling it to serve millions of customers.

The Three-Layer Pyramid of AI Engineering

Let’s look at the pyramid below which partitions the AI development landscape into three layers:

On the bottom, we have computing infrastructures, including CPU, GPU, FPGA, edge device, cloud computing, etc.

The middle layer is AI frameworks. For most of AI developers/engineers, frameworks are their primary interface to the low-level hardware.

Finally, the top layer is the vast end-to-end AI applications.

Having a B2D Mindset

B2D is the shorthand for business to developer, as the products and services we are building are marketed to other developers. Having a B2D thoughtship means always keeping the developer experience in mind and thinking in switched positions.

Community Want vs. What We Build

What is Symbolic Search System?

… at the core, Solr/Elasticsearch is a symbolic IR system that relies on the effective string representation of the query and product. … 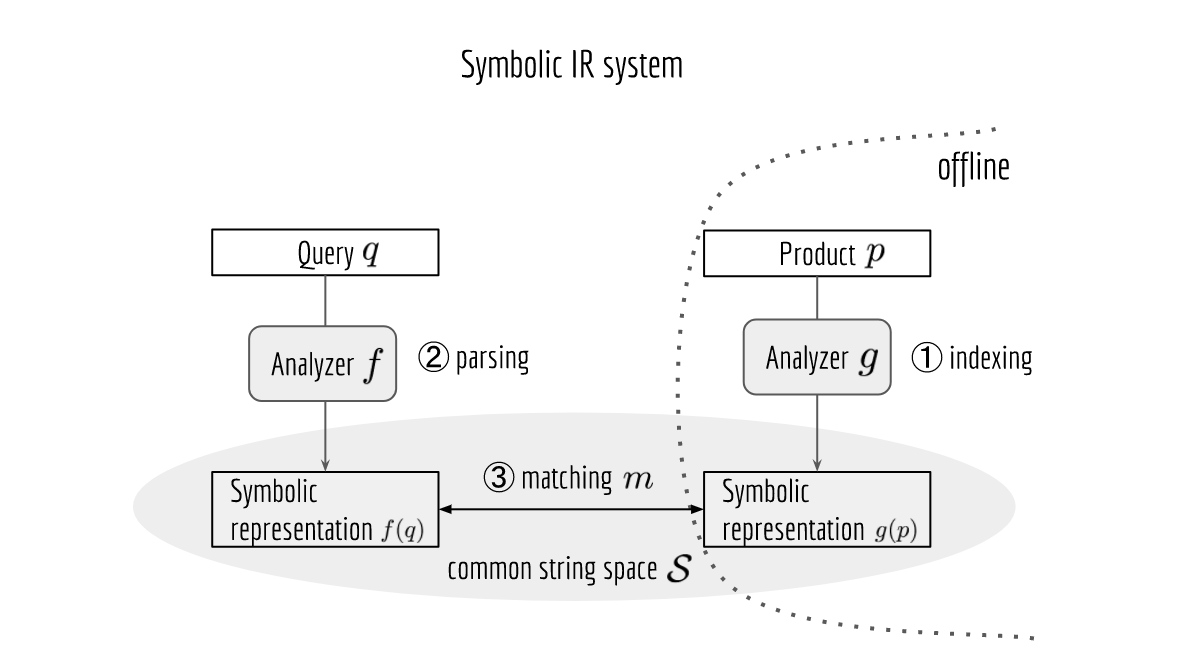 What is Neural IR System?

The next figure illustrates a neural information retrieval framework, which looks pretty much the same as its symbolic counterpart, except that the NLP pipeline is replaced by a deep neural network and the matching job is done in a learned common space. Now $f$ serves as a query encoder, $g$ serves as a product encoder. 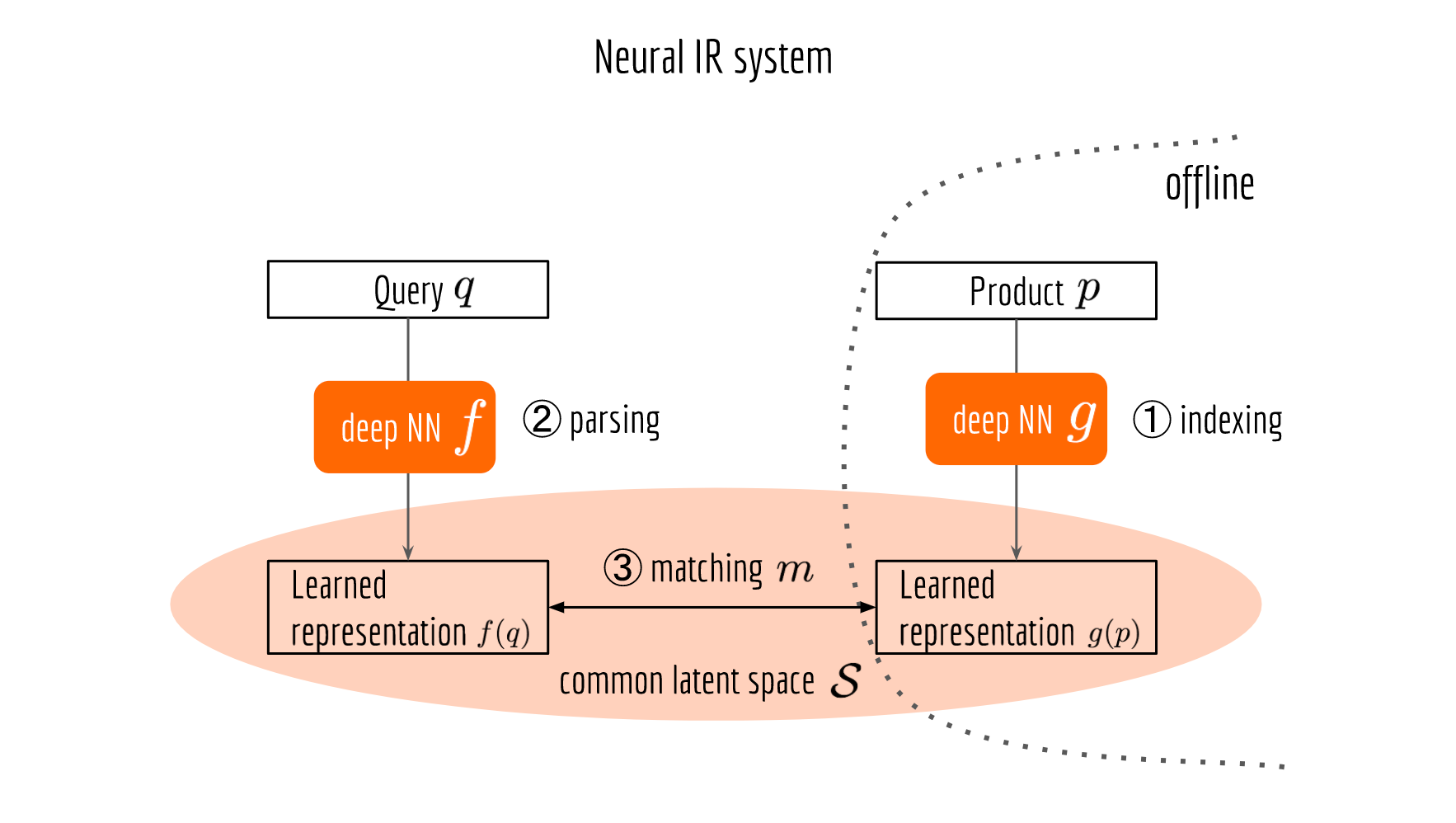 Neural IR is a new concept emerging just recently. There are not so many off-the-shelf packages available. Plus, training a neural IR system requires quite some data. The next table summarizes the pros and cons of two systems.

From the market perspective, there are two pain points of the current token/symbolic-based search:

Having a search system with the reading comprehension ability can make the user experience smoother and more efficient, as all time-consuming tasks such as retrieving, inferring and summarizing are left to the computers. For impatient users who don’t have time to read text carefully, such system can be very useful 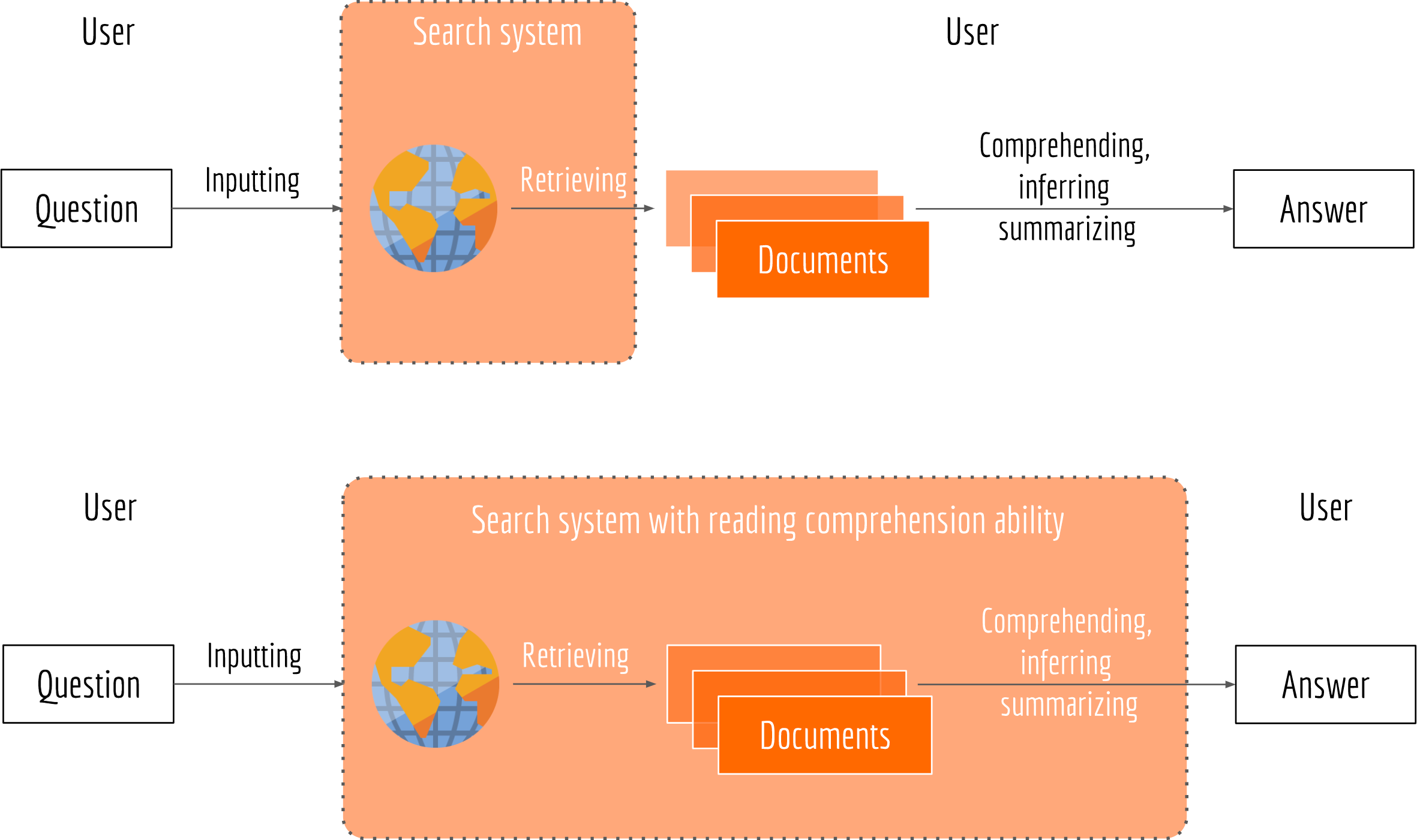 The Duality in Question Answering System 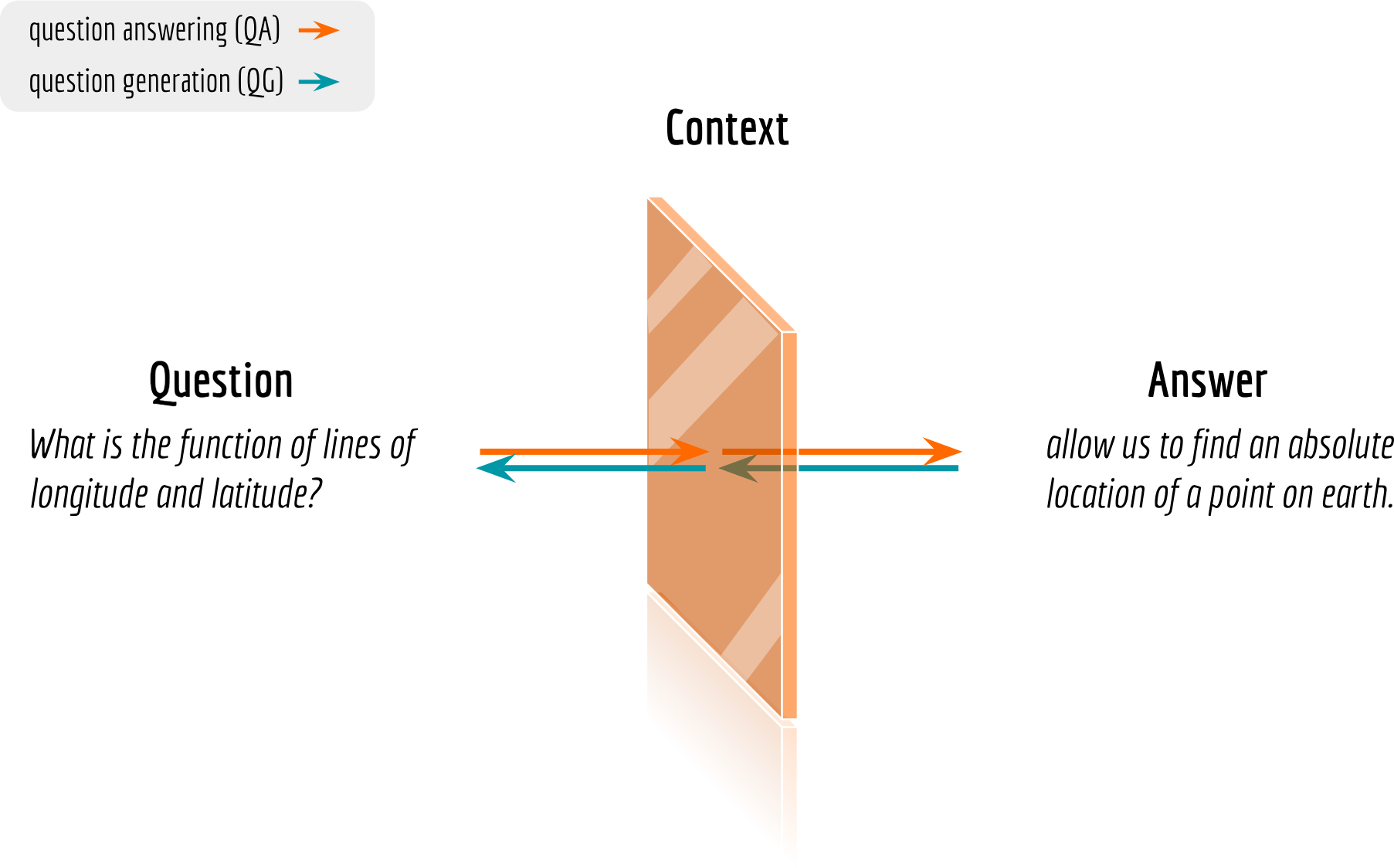 Careful readers may notice that there is some sort of cycle consistency between QA and QG: they are both defined as inferring one modality given the counterpart based on context.

Sequence Encoding as a Service

So if many NLP applications rely on semantic features, then why don’t we build a sentence encoding infrastructure that can serve multiple teams? This idea, despite how simple and straightforward, is not really practical until recently. Because many deep learning algorithms tailor the vector representation to a specific task or domain. Consequently, the representation from one application/team is not really reusable to other applications/teams. On contrary, BERT (as well as ELMo and ULMFit) decomposes an NLP task into task-independent pretraining and task-specific fine-tuning stages, where pretraining learns a model that is general enough and can be reused in many downstream tasks.

Decoupling also clarifies the C/S role. When the feature extraction becomes the bottleneck, then scale up the GPU server. When the downstream network is the bottleneck, then optimize the client by adding more CPU machines or doing quantization. When training data is too old or concept-drifted, then retrain the BERT and version-control the server, all downstream networks immediately enjoy the updated feature vectors. Finally, as all requests come to one place, your GPU server has less idle cycles and every penny is spent worthily. 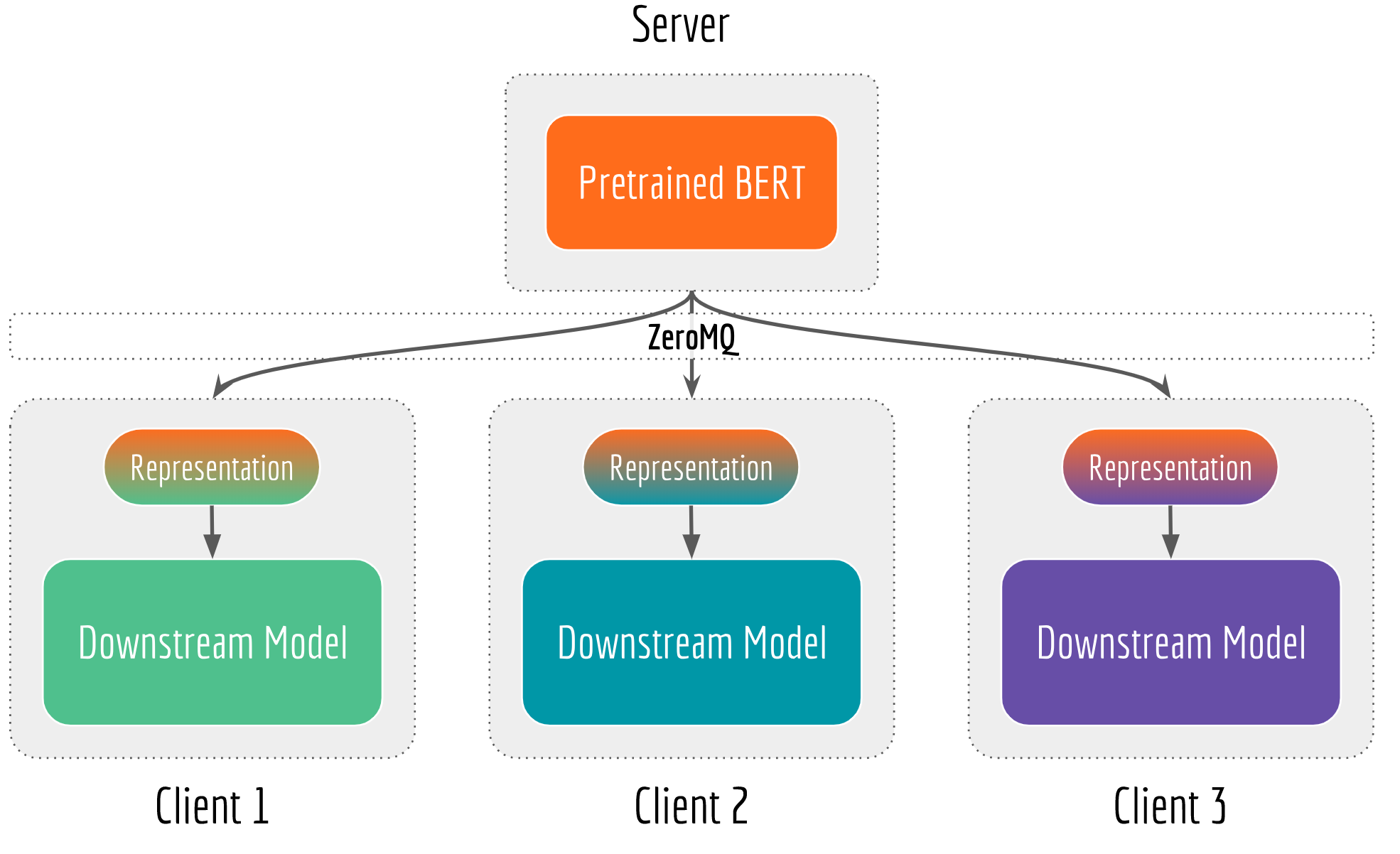 Training, Indexing, and Querying in a Neural Search System

The first concept I’d like to introduce is the runtime. In a typical search system, there are two fundamental tasks: indexing and querying. Indexing is storing the documents, querying is searching the documents on a given query, pretty straightforward. In a neural search system, one may also face another task: training, where one fine-tunes the model according to the data distribution to achieve better search relevance.

Jina is Not an One-Liner

Implementing the Right Feature at the Right Layer

Now that we have represented questions and passages into vectors, we need a way to exploit their correlation. Intuitively, not all words are equally useful for answering the question. Therefore, the sequence of passage vectors need to be weighted according to their relations to the question. 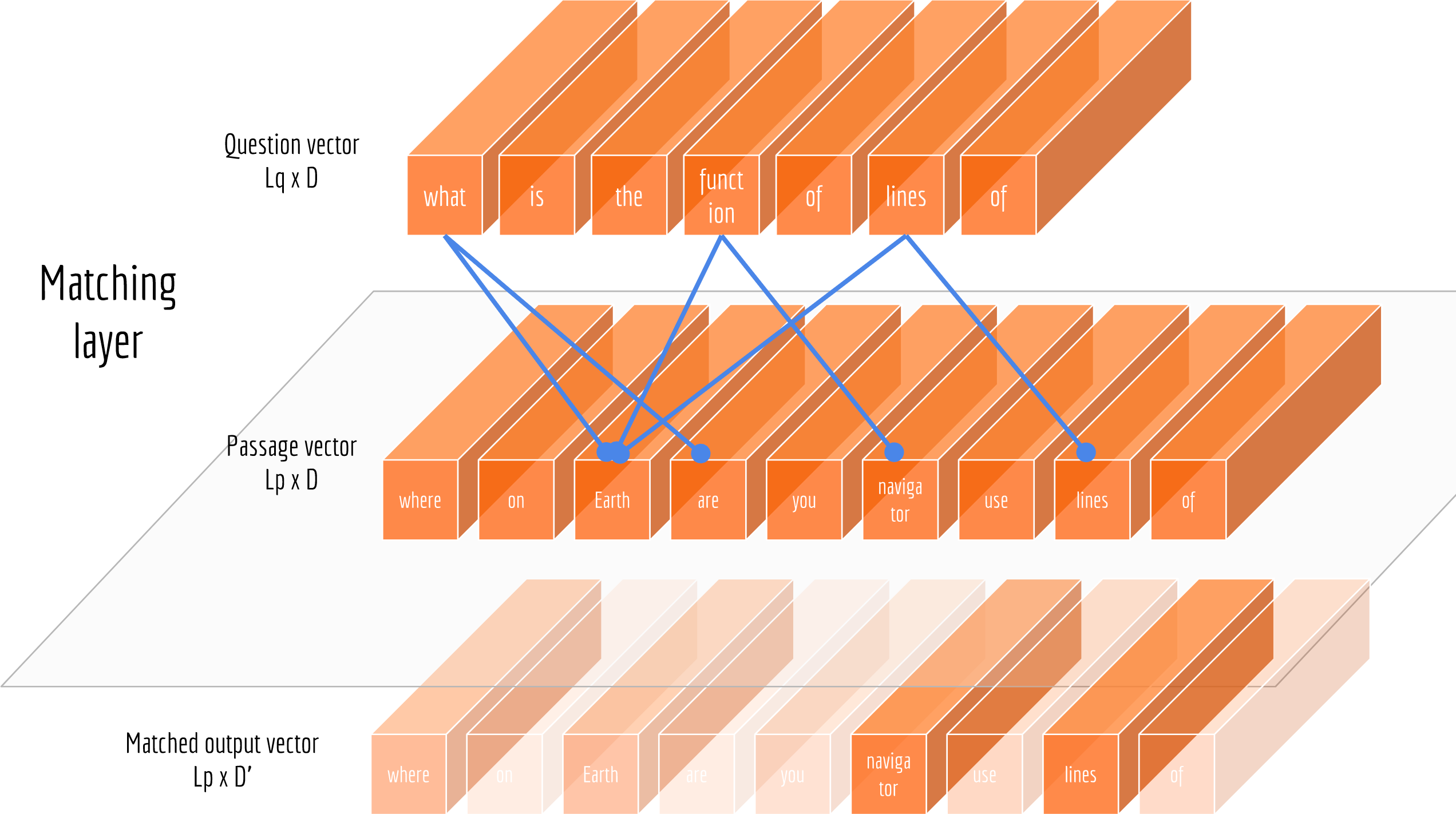 Some very recent MRC works have also recognized the relationship between QA and QG and exploited it differently. They designed some sharing scheme in the learning paradigm to utilize the commonality among the tasks. For readers that are familiar with multi-task learning, it should be no surprise. Sharing weights or low-level representations enables the knowledge to be transferred from one task to another, resulting a model with better generalization ability.

Also, don’t forget that sequence encoding is often just a low-level subtask of our ultimate goal (e.g. translation, question-answering). The upper layers are waiting for the encodes so that they can carry on more interesting tasks. Thus, it is not worth spending so much time on the encoding task itself.

Each encoder consists of the following basic building blocks: an element-wise fully connected feed-forward block, stacked LSTMs and a self-attention block. The final output of an encoder is a concatenation of the outputs of all blocks. 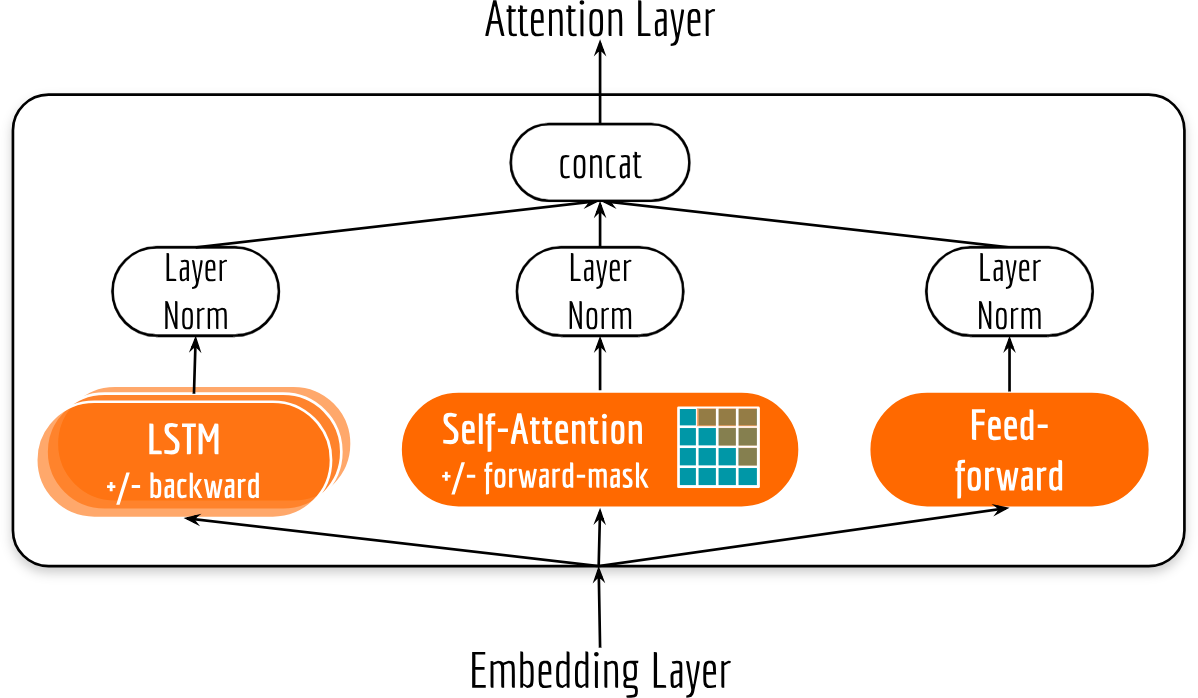 Document now has a recursive structure with arbitrary width and depth instead of a trivial bi-level structure. Roughly speaking, chunks can have the next level chunks and the same level matches; and so does matches. This could go on and on.

A good neural search is only possible when document and query are comparable semantic units. 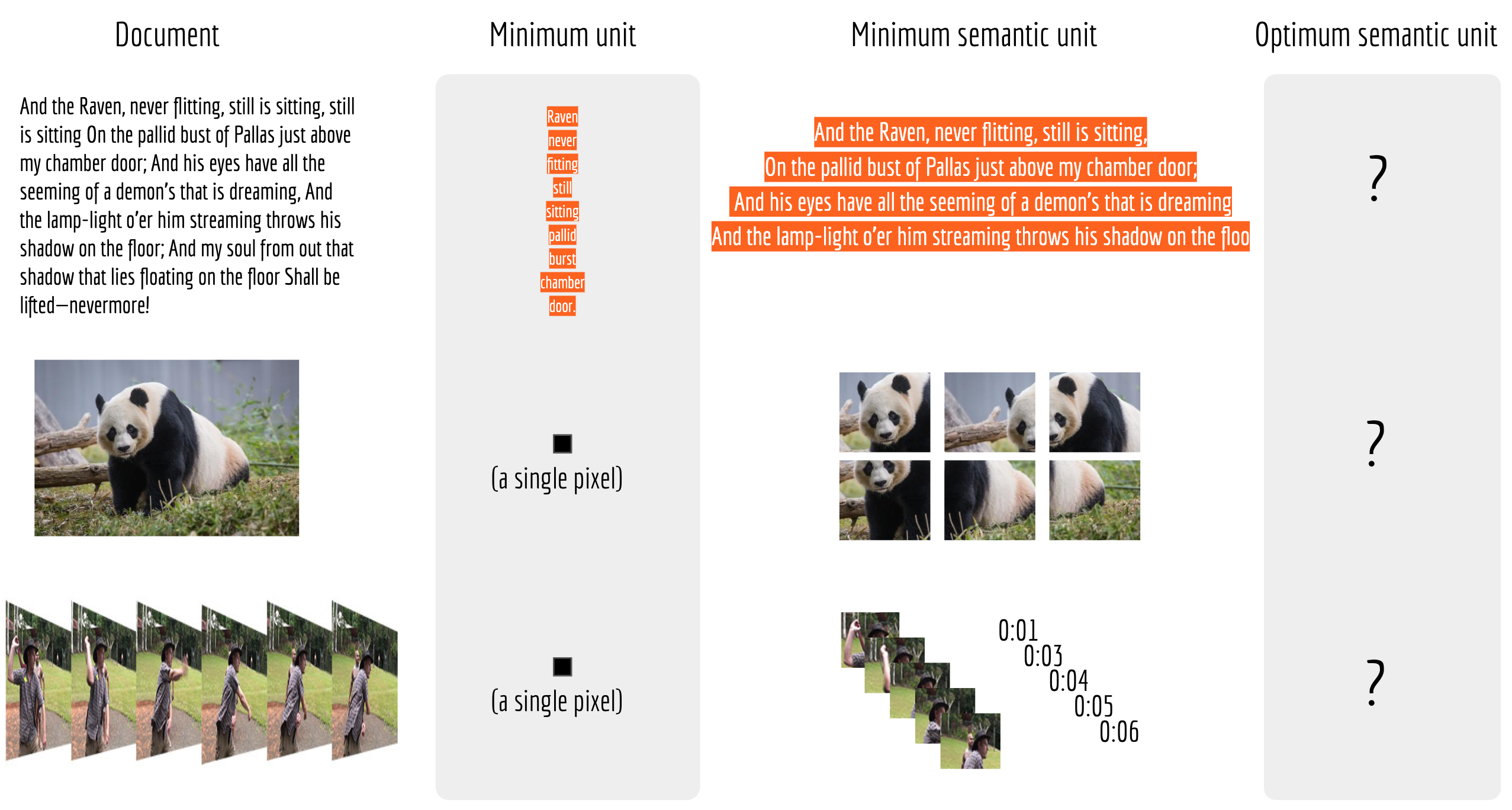 Specifically, freezing substitutes all variables by constants, i.e. from tf.Variable to tf.Constant. Pruning removes all unnecessary nodes and edges from the graph. Quantizing replaces all parameters by their lower precision counterparts, e.g. from tf.float32 to tf.float16 or even tf.uint8. Currently, most quantization methods are implemented for mobile devices and therefore one may not observe significant speedup on X86 architectures.

As the second example, consider a client is sending 10K sentences at every 10ms. The server parallelizes the work into sub-tasks and assigns them to multiple GPU workers. Then another client joins in, sending one sentence per second. Instinctively, this small-batch-client should get the result instantly. Unfortunately, as all GPU workers are busy computing for and receiving from the first client, the second client will never get a time slot until the server finishes 100 batches (each with 10K sentences) from the first client. 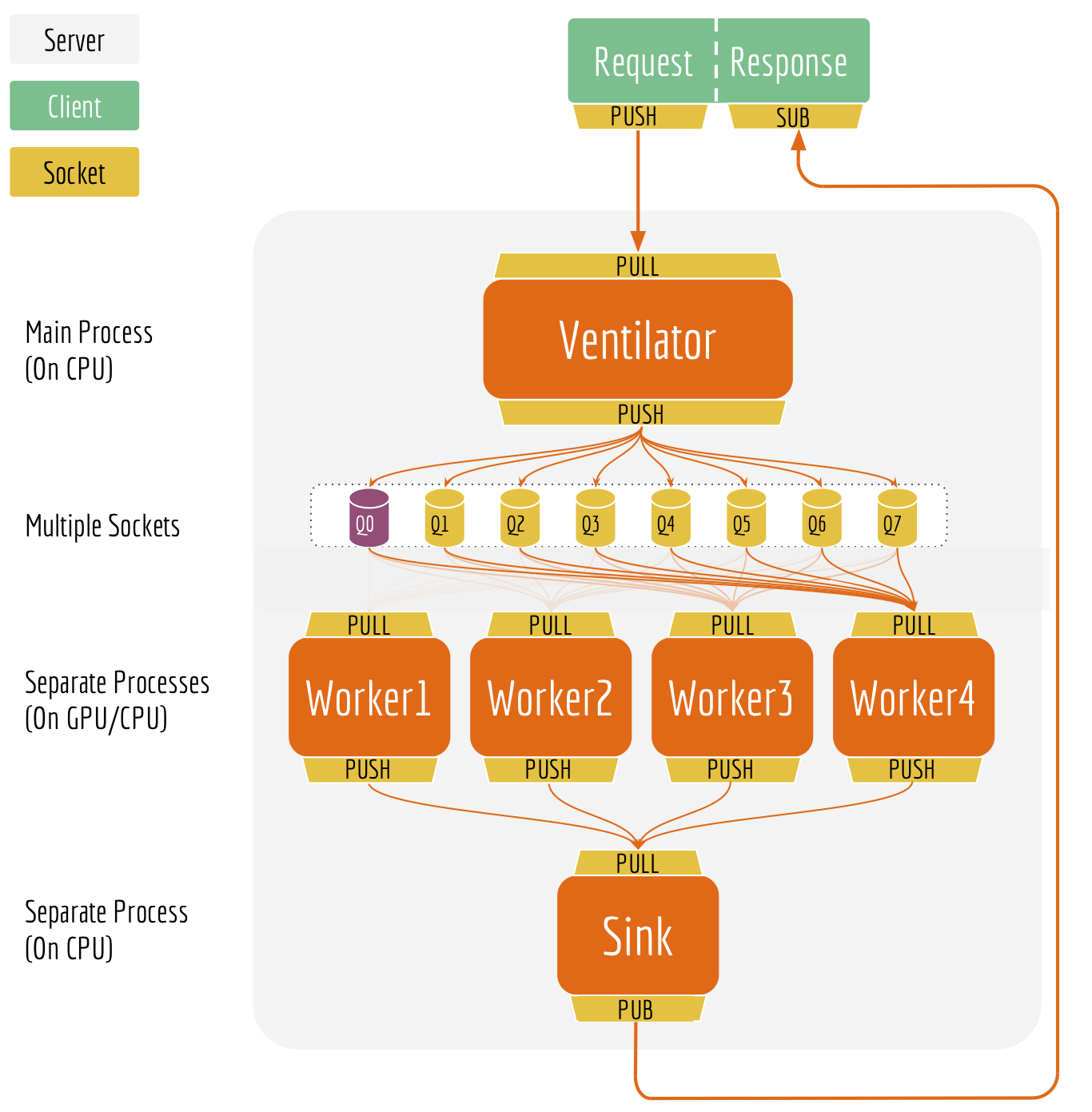 From time to time, one frequent question I was often asked by the community is: “Han, can you support model X and make it X-as-a-service?”

This makes me wonder if bert-as-service has a sustainable architecture, in which rapidly changing requirements can be met by constantly adding new models to it, not modifying (and breaking) old ones.

Let’s first look at what an algorithm usually requires to run/reuse:

One can also maintain executors in its own (private) repository by simply adding this Github action to the CI/CD workflow. In other words, we provide both centralized and decentralized ways to use Hub.